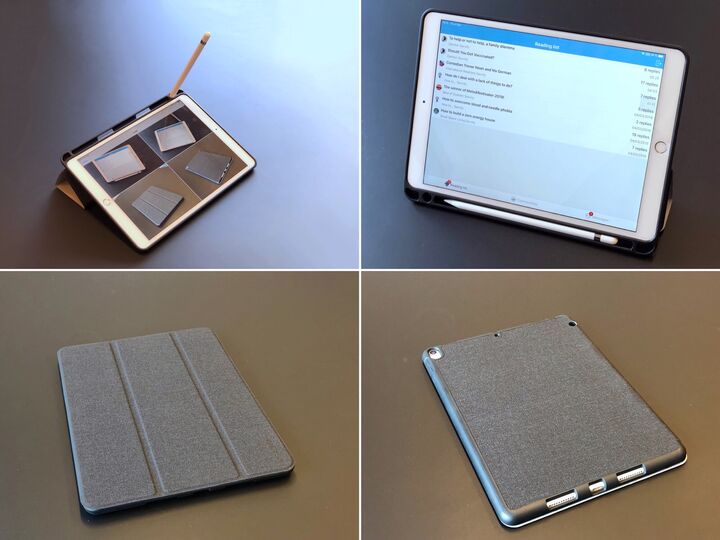 The hard plastic back cover of my iPad Pro 10.5 had a crack in one of the corners. I went looking for another one. There aren't a lot of cases for the 10.5 inch iPad size. It took me quite some time to find the Infiland iPad Pro 10.5 case on Amazon.

One of the things that first caught my attention was the thick hard rubber back cover. In one of the promotion pictures on Amazon, you can see it bent almost 90 degrees. The front cover can be folded like Apple Smart Cover, which converts it to a stand with two viewing angles. Standing at an angle, for watching videos, and laying it down, for writing with the soft touch keyboard. As long as it does both of these without being too shaky, it’s enough for me. The front cover also has built-in magnets that sleeps and wakes the display.

Another important feature I looked for was a pencil holder. The Infiland case has an Apple Pencil holder built into the rubber back. When the front cover is closed, it covers the pencil so it won't fall out (the rubber holds it pretty steadily too).

Cutouts for lightning cable, speakers, microphones, and headphones seem large enough to let most cable sizes in and the sound of the speakers out. I've had no problems so far. There is a round hole in the rubber beside the Apple Pencil holder. This is meant for holding the pencil when not in use. You have to press the pencil in pretty hard to make it stick. For me, that isn't a problem as I don't need a stand in the case for the pencil.

Build quality far exceeded my expectations for a case that cost 13 EUR (less than 15 USD). The rubber back case is very sturdy and covers all parts of the iPad if it falls on a flat surface. The foldable front flap also is more rigid than many others I have used. When you fold it and secures it with the built-in magnets, it feels like Apple quality. It snaps in place and doesn’t wiggle. Closed, the front cover seems to always stay in place without any gaps between it and the screen. The outside material of the case feels like a rubbery canvas ready for some rough times. I like it.

It has only been a week since I got the Infiland iPad Pro 10.5, but so far the whole experience has been a positive one. Everything with it seems well thought out (except the Apple Pencil stand that I don't care about anyway). At less than 15 USD I think it is a real bargain. This also is my first encounter with the Infiland brand. If they make all products like this, I will be happy to do business with them many times again.

The only real complaint I have, is that the iPad case doesn’t seem to have a model name. It just says “Infiland iPad Pro 10.5 dB”. Infiland have other other iPad case models that look a little different, so I’m not sure how to tell them apart without looking closely at the images.

I have seen this case made for iPad Air 2019, iPad 9.7 inch, iPad Pro 11 and other models too. If you want it in another color, they offer that as well. The dark grey color on my case is darker than it is in my photos.

A very thorough review. My friend is always misplacing his iPad Pen, I will definitely recommend this to him.

What I like about this case is that it has a designated spot for the pencil. Although my current case allows for the pencil to charge while it is on, it doesn't hold it in position sadly. I will look to upgrade to this in the near future.