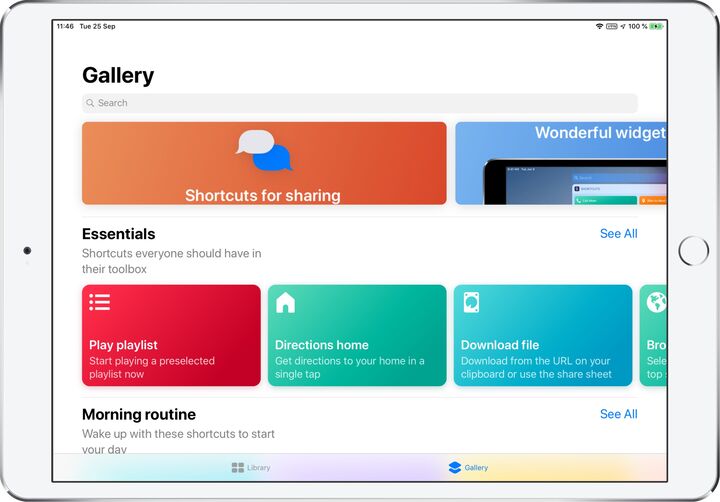 A couple of years ago, Apple bought a company developing an app called Workflows. In iOS 12 Apple have made their own version, called Shortcuts. This is how they describe what a shortcut is:

A shortcut is a quick way to get one or more tasks done with your apps. The Shortcuts app lets you create your own shortcuts with multiple steps. For example, build a “Surf Time” shortcut that grabs the surf report, gives an ETA to the beach, and launches your surf music playlist.

If you have used a Mac you may remember the Automator program. Shortcuts is the iOS equivalent.

You can do many useful things with Shortcuts. If you aren’t interested in building your own shortcuts, you can download shortcuts built by other people. Start by downloading the Shortcuts app to your iPad or iPhone.

» ‎Shortcuts on the App Store

When you open the app, there are two tabs along the bottom, Library and Gallery. In Gallery you can find many general purpose ready-made shortcuts. Also check out the user guide if you want to learn how to build your own shortcuts.

I have built and use shortcuts for many tasks that I do frequently. Even if they save just a minute, or even seconds, each time, it quickly adds up to a lot of saved time. Some examples are:

And lots of even more niched tasks. :-)