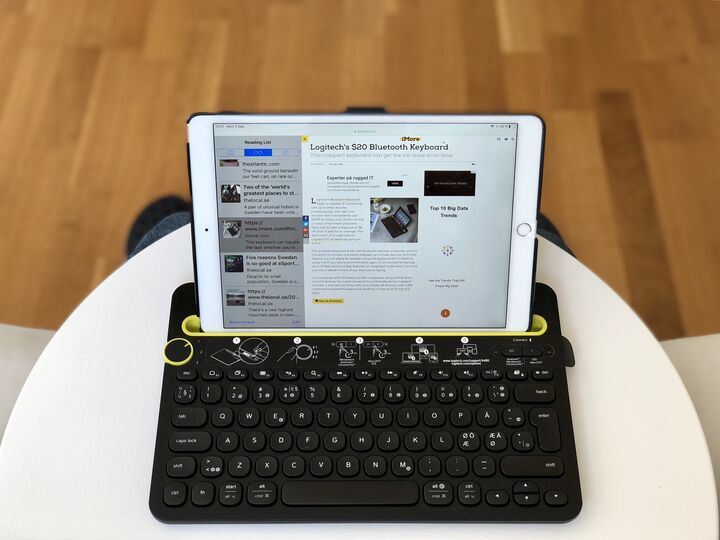 A while back I decided to keep a Bluetooth keyboard at home so I don’t have to unpack the bag I take to the office when I want to write at home. After doing some research I settled for the Logitech K480 Bluetooth keyboard. I wanted a keyboard that was easy to pair with different devices, that could handle iOS keyboard shortcuts, that didn’t cost a fortune and was sturdy enough to throw in a bag if I want to bring it with me.

K480 has all the keys you may be used to on other keyboards. Volume controls, play, stop, back and forward buttons. It also has a dedicated Home button, Spotlight search button and open and close soft keyboard button. It has all the standard MacOS buttons.

Another feature that makes the K480 very useful, is the ability to pair it with up to three Bluetooth devices at the same time. After you have paired them you choose which one to control with a round knob on the top left side of the keyboard. You can have your iPad, computer and phone and switch between them whenever you like. It works with iOS, macOS, Android, Windows and ChromeOS.

The two standard AAA batteries lasts for months with my use.

As you can see in the photo, the keyboard has a slot for placing a tablet or phone in. It works well and is sturdy. The keys are quite comfortable to write on. Not like on the Magic Keyboard, but good enough for an extra keyboard.

Are there any less good things about Logitech K480? It is heavy. I am used to the Apple Magic keyboard that I would guess weighs about half as much. It is also quite big to accommodate for the special keys, the tablet slot and the device knob. If you need a backlit keyboard, this isn’t it. The tablet slot isn’t adjustable so you can only place the iPad in one angle when you use the slot. On the other hand, many iPad cases have good built-in adjustable stands. The keys makes a lot of sound when you press them. To me that usually isn’t a problem.

The price of the K480 can vary quite a lot between retailers. The cheapest I have seen it is around 20 USD. I think that makes it very affordable.

Do you use an external keyboard with iPad? If so, which one?

This was just the post I needed! I'm heading to uni in short of two weeks so keyboard for my iPad would come in good use.  The price is great too given I am on a student budget!

I am currently using a wireless Tecknet keyboard I found cheap on Amazon a while ago, but it uses USB instead so it cuts out frequently. How could I have forgotten about the existence of Bluetooth?

Thanks for the tip! I have ordered one now. Will use it for iPhone and iPad. Maybe for my Windows PC as well.

Great. Did you find a cheap seller?

I think that’s where I bought mine but on a sale.

#7 I noticed that Amazon did have a good deal as well, in the UK at least.